I am a little mesmerized, to say the least, with these boots. I spotted them on the feet of wedding photographer, Jason Keefer, at the hair salon on Saturday. After my Shirley Temple ‘do was complete, I snuck adoring glances at the swirling, hand-stitched craftsmanship dancing over his feet until finally mustering up the courage to ask where on earth they came from. I had an idea they weren’t from around here, as such a fine specimen of Italian leather is about as commonly seen in the Valley as, say, Paris Hilton. Jason revealed nonchalantly and humbly that, yes, my musings were correct; the boots were Prada. He actually scored them from a friend in trade for his one-of-a-kind snake-skin, gold-tipped cowboy boots purchased at the Greene County Fair. As a girl quoted in The Daily News Leader describing her own, one-of-a-kind cowboy boots, I would’ve normally questioned the fairness of this barter, though after having my first “meeting of the Prada” I must say it was worth it. Thanks, Jason, for letting me swoon over the boots all weekend…maybe one day I, too, will own the crown gem of them all: The Prada Boot. 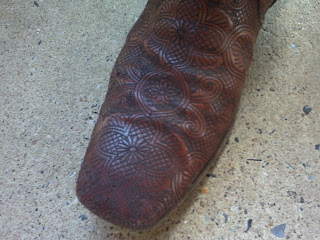 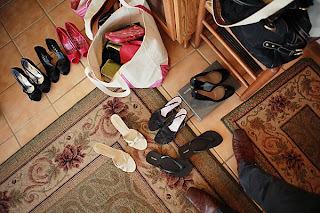 Jason snapped this photo of his boots next to my line-up of shoes before the wedding. I always bring extras…you never know when someone might break a heel!

She doesn’t seem to notice the “real” Henry, our 19-month old black lab, though we’re not sure how she could miss all […]

Last Sunday was a special dedication service at church after finishing a very long building renovation process. I took notes on the […]

Sometimes I find the big moments in life are just too big for words. It–the love, the emotions, the beauty–is all just […]