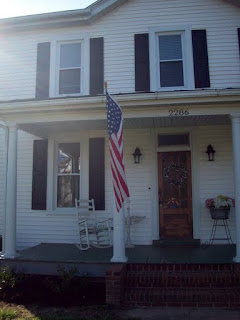 And like a bird that’s on the wing and is flying free
He can hear the song of home endlessly.â€
-Van Morrison, â€œSong of Homeâ€

The first time I heard Van Morrison was when my mother sang â€œBrown-Eyed Girl,â€ while trying to put me to sleep as a baby. The only thing that ever made me stop crying was a long drive, and that song playing in the background, with her comforting voice in time with his Irish accent, unaware of the melodies she made as she drove. Of course I cannot remember that far back, but to this day that song still puts me at ease, as I drive unfamiliar streets in my own car and wonder how I got so far from home.

When first arriving at Roanoke College, hundreds of miles away from my own small, Virginia town, I thought I would never feel at home again. I missed sitting outside on my back porch, journal in hand, watching the old barn that never changed, framing the sunset each night. I sang to the Tupelo Honey album, playing on a miniature Fisher Price record player, stretched outside as far as the orange extension cord would reach, while I wrote every evening. I believed â€œthe music made me feel so free, made me feel like me,â€ just as Van sang. With each verse came the inspiration to fill every last blank page of my journal, if not with the poetry of lost loves, or newfound adventures, at least with the lyrics to the songs I had memorized. The words meant something different each time I heard them, but they always told the same story: no matter what happens along the way, you would always find yourself back home in the end.

In the beginning of my freshman year, while feeling homesick and alone, the only thing that seemed to put me at ease were my nighttime drives through the streets of Salem. I drove as if I owned them, sometimes alone, sometimes with a close friend, and always ended up in the same place, on the same hill, within the same valley, listening to the same three songs. I always started with â€œBrown-Eyed Girlâ€ as I was making the loop around the parking lot because the upbeat tempo and lyrics made it a â€œdriving song.â€ As I stopped the car, in the same spot as all the times before, â€œSweet Thingâ€ would soon be playing, and I would be singing until my voice become hoarse once again. I sang, my voice in time with his, as â€œI raised my hand up into the nighttime sky,â€ finally realizing why I was here, not only in this car, or at this college, but on this earth, alive. I saw how I fit into the roundness of things as if I were one of the little leaves that made up one of the thousands of trees on the mountains above me.

Although it took a little searching, and some aimless driving, I had found my home once again, in these small moments in my car, singing my favorite songs into the crisp Salem air. As in any Van Morrison song, the lesson is always the sameâ€”no matter how many wrong places you turn, how many words you may forget or sing off key, the important thing is that the roads that lead you home will always be there, if only hiding in the background of a song.

I guess I never paid attention to the fact that Anthropologie had a kiddie section until now…I can’t get over these adorable pieces. […]

This is where it all began, people. If it weren’t for Dr. Heller at Roanoke College introducing me to G. Lynn Nelson’s […]

I saw this quote on a blog I follow and thought I’d share. “Woman was born to create…in creating she becomes herself, […]

I found out about Own Your Beauty through BlogHer, a community and media company created in partnership with women in social media. […]